Full stack engineer salary when looked at is very attractive but attaining the position of a full stack engineer in any given organization is no easy job. Firstly, you must master both frontend and backend web development, and how you can make these work together to create a functioning website all on your own.

Looking at the work that goes into becoming a full stack engineer, everyone can agree that professionals in this career deserve a hefty salary. However, you may want to know if they earn what they deserve before pursuing the career. 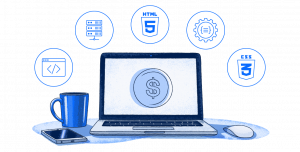 The salary of a full stack engineer varies greatly on what job they end up getting, and in which organization they got employment. Full stack engineers that settle for lesser jobs like frontend or backend engineers usually end up with lesser weekly wages than those using the full potential of their skills.

However, when you narrow it down to jobs with “full stack engineer” in their title, it becomes easier to estimate the average salary. According to Glassdoor, the average full stack engineer earns $102,265 as their base salary, which is an improvement, compared to the $101,794 that it was in 2021.

If you’re looking to choose web development as a career, you should strongly consider becoming a full stack engineer. Full stack engineers are estimated to make 55% of all software developers by 2030, making it likely for more companies to require their services.

Another advantage of choosing full stack engineering as a career is the remoteness of most jobs in the United States. Statistically, about 72% of all full stack engineers work remotely, which is huge, even compared to other high-paying IT jobs. If you fancy spending time with your family, you may want to focus on mastering multiple programming languages.

After getting the necessary qualifications for working as a full stack engineer, it’s important to learn where to seek employment. At this point, it’s useless to repeat that some states house higher-paying jobs due to the existence of more companies hiring full stack engineers.

The following sections will list some of the states with the best paychecks for full-stack engineers and some of the companies where you should actively attempt to get employment.

With that said, here are three of the top states where full stack engineers earn the most base salary on average.

California is reputed for being the destination for most tech firms in the United States, thanks to its reputation. If you want better pay at your full stack engineering job, you should consider working for a technological firm in California.

Working in California is the logical option for most full stack engineers, thanks to the better paycheck. Depending on who you ask, the average full stack engineer earns about 9% better than the national average, with some jobs in Mountain View paying up to $136,000.

New Jersey isn’t exactly renowned to be a state that houses the top tech firms, but you’ll probably earn more as an entry-level full stack engineer here. One reason why you may want to choose a job in New Jersey over one in California is because of the cost of living.

Don’t get me wrong: it’s notoriously expensive to live in New Jersey. However, this state starts to sound like a dream when you compare the cost of living to that of California. When you consider the fact that the average full stack engineer salary in New Jersey is about 8% higher than the national average, you’ll understand why it’s a good idea.

On average, a professional in this career will likely earn about 6% higher in Massachusetts. This increase brings the mean salary to about $108,000, with the salaries going up to about $130,000 for the best jobs.

Working for the wrong company in the right state will almost certainly earn you the wrong salary. Some organizations tend to pay full stack engineers more decently than others. However, it’s also generally difficult to get employment into these companies since they have crazy requirements, and rightfully so.

If you’re ready to pay the price, you should consider seeking employment in companies like New Relic, DISYS, and Oscar. These organizations pay insanely higher salaries than what you’ll earn at an average IT startup in the United States.

Getting employment at one of these companies requires acquiring essential skills like TensorFlow, Scala, and Swift. Also, most of these companies offer other compensations like relocation assistance, health savings accounts, and 401(k). 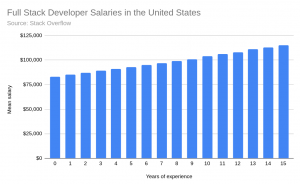 The average salary of a full stack engineer mightn’t look crazy compared to other emerging IT jobs, but it’s certainly impressive. Add the extra benefits like 401(k), gym membership, internet reimbursement, and paid leaves, and you’ll have a job that most people eye.

If you want to know how much they make in monetary terms, however, you may want to go through the entire article. Not only did I answer the question, but I also listed some of the highest-paying states for full stack engineers to help you make the right choice.