DevOps engineer salary has become an issue of discussion and also an important career discourse in this present decade.  DevOps engineering wasn’t even a thing two decades ago but it’s one of the top-paying jobs in the technology industry today. Also, I’ll admit that DevOps engineers have one of the coolest job titles in IT, which makes sense since the word is more of a buzzword.

Frankly, the age or “fanciness” of a job title doesn’t matter when you’re trying to choose a career. Instead, you’ll be more concerned with the things that matter, like how much does the average DevOps engineer makes in the United States or Canada.

In this article, I’ll show you the average salary of a DevOps engineer in the United States and some of the top companies that hire them. In addition to that, you’ll also learn some of the states where you can get the highest paying DevOps engineering jobs, and if it’s worthwhile to migrate to another state for a better salary. 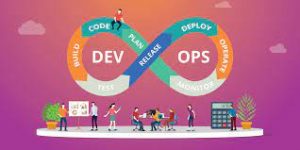 Realistically, you can make far above the average pay by working in any respectable company in the United States. Even some startups pay as much as the national average, making it one of the best IT jobs around. If you’re still in some decision-making process, you should probably change it for something else.

The attractive pay for DevOps engineers in the United States, as well as the massive bonuses that come with an employment opportunity, are some of the reasons why you should consider pursuing it as a career.

Certain states have more companies hiring DevOps engineers than others, making available labor very competitive. Thanks to the competitiveness, these engineers can demand better salaries, making those states some of the highest paying states for a DevOps engineering job.

However, it’s important to do your due diligence before moving to get a higher-paying job, since living in these cities also has big caveats. Most notably, states with high-paying jobs are reputed to be very expensive to live in, potentially losing you some money, even with a higher paycheck.

With that in mind, here are the states with the highest paying DevOps engineering jobs, and I’ll try to cover how expensive it is to live in these states.

While California tops the list of states with the highest-paying jobs in DevOps engineering, it’s far from being the best state to work in as an engineer. Firstly, it’s important to point out the availability of jobs, as well as the $123,904 salary, but that’s exactly where the advantages stop.

When you start to review how expensive it is to live in California, you’ll understand why working somewhere else might be a good idea. If you’re staying in the state, you’ll be paying one of the highest prices for gasoline and energy in the United States, cutting deep into your salary.

Washington doesn’t have as many high-paying jobs as California, but it’s still a very rewarding place to live as a DevOps engineer. With an average base salary of $117,270, you’ll be earning significantly more than you can in most states of the United States.

However, Washington isn’t a very cheap place to live either. There are also not as many DevOps engineering jobs as you can find in California since the latter has more tech industries than the former. If you already stay in Washington, however, you’re in one of the best cities to be a DevOps engineer.

While the state you live in largely determines what salary you get as a DevOps engineer, the single most important factor boils down to where you work. Engineers working at an unknown tech startup will make nothing close to the national average, while employees at top tech startups earn significantly higher.

With that in mind, here are some of the companies to seek employment as a DevOps engineer for their excellent remunerations and work benefits.

Google is famous for its increasingly high salaries and great work environment, inspiring newbies to the tech world to seek employment at Google. Since the company hires DevOps, you can always be sure that they pay one of the most attractive salaries on the market for professionals out there.

IBM is another well-known company that pays its DevOps engineers decently, matched only by Google’s attractive offer. With an average base pay of $121,185, IBM DevOps engineers are one of the best paid in the world.

The company offers several benefits apart from the pay, some of which may include health insurance, a 401(k) plan, and frequent vacations. However, the company’s headquarters in the UK might be a negative factor since it’s a relatively expensive place to live.

DevOps engineers are one of the most sought-after in the tech industry, thanks to the limited availability of truly capable engineers. If you can sit through the education required for the average engineer, you’re truly deserving of a salary that reflects your dedication.

In this article, I’ve researched and compiled the average salary statistics for DevOps engineers in the United States. If you think that sounds like great compensation for what you invested in acquiring education, you’re good to go.