In discussing data engineer salary, there is the need to not confuse the role of data engineers with that of data scientists. While both of these professionals work hand in hand, there are clear differences between data science and data engineering that make them different.

Data scientists are different from data engineers because the former only works to make sense of big data by incorporating them into real-world problems. However, data engineers are tasked with building the systems that are responsible for data collection and management before the scientists even start working with them.

In this article, you’ll learn how much you can get paid for working as a data engineer in the average organization. Also, I’ll cover the variation between their salaries in the big tech companies compared to the average startup to show you how much money you can potentially make. 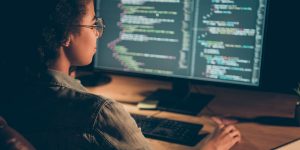 According to Glassdoor’s analysis of the salaries of over 7,800 salaries of real data engineers, the average professional in this role is reported to make about $112,493, while keeping its place as one of the most sought-after tech jobs in the United States.

Depending on the company you’re working for, this salary may also be supplemented with numerous monetary and non-monetary benefits. Some of these benefits may include insurance, vacations, paid leaves, and in some instances, a 401(k) plan.

If you’re working at any random startup as a junior data engineer, your salary will likely be around $76,000, while the top companies pay their employees about $166,000 to start. While you may not want a low-paying job, it may be your only opportunity to gain meaningful experience for a better job.

There are many reasons why you may want to pick data engineering as a career, with the increasingly high demand for competent engineers being one of the reasons. If you’re a big fan of working from home, you may be pleased to learn that data engineering lets you work partially or fully from home in most cases.

However, getting a job at one of the top-paying tech companies is more of a pathway than a gamble. If you’re prepared to give what it takes, it mightn’t be as hard as you think to work at Google. In the following section, I’ll give a comprehensive list of the best companies hiring data engineers to help you determine what it takes.

The company you eventually work for as a data scientist depends on what you learn while you were educating yourself. If you learned programming languages that are popular with the country you’re planning to work with, you’ll have a better shot at a job.

To help minimize your research, I’ll outline some of the companies that pay the highest to their data engineers, so you can find what to learn to get in there.

Amazon has always shown interest in hiring the best professionals that are capable of furthering their machine learning dreams. However, machine learning would be useless without sample data, and sample data is nonexistent without competent data engineers.

The salaries of data engineers at Amazon vary wildly, depending on their perceived importance to the company. You may be earning as low as $75,000 or as high as $200,000 annually. However, the additional bonuses you get from working at Amazon make the company the peak goal for most data engineers.

Facebook, recently branded Meta, pays some of the world’s highest salaries to data engineers in the United States. The company uses the power of AI and ML, and by extension, data engineering, to understand how to develop more addictive newsfeeds to keep Facebook and Instagram users hooked. While that cause may not sound like something too serious, Facebook is ready to pay upwards of $170,000 to competent data scientists. As long as you meet the requirements and passed Facebook’s admittedly hard interview, you can always get a job at the company.

Microsoft builds so many projects relating to machine learning that the reasons why they hire data engineers aren’t even a discussion. If you’re pursuing a career in this profession, you should put Microsoft on your list of top companies to seek employment.

The company pays an average of about $160,000 annually as a base salary for its data engineers, among other entitlements. Paid vacations, health insurance, and cash bonuses are some of the extra benefits you can get from working as a data engineer at Microsoft.

Some states have a higher concentration of data engineering jobs that pay good salaries. While moving to get better jobs isn’t a very effective strategy, identifying what kind of state you’re in will help you set the bar properly during salary negotiations.

If you’re after the highest paying jobs, California is your best bet, as the over 13,000 data engineering job openings pay an average of $122,022 annually. This is comfortably higher than the $112,000 average and it blows the average wage of an American citizen out of the water.

On the flip side, Kansas ranks as the worst city to find a data engineering job, as the median salary is only $78,629. If you currently stay in Kansas, you may want to consider moving or finding a remote job that pays better than the average. 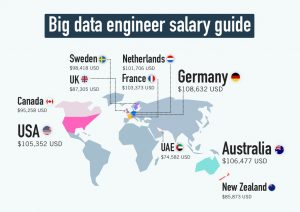 Data engineers salary and data scientists salary may be similar, but there’s no doubt that their jobs are strikingly different. While the former build the systems for the collection and management of data, the latter is tasked with making sense of them.

If you think data engineering makes more sense, you can pursue a career in the field by following the recommended educational path by your dream employer. Some of the companies that pay data engineers the most include Microsoft, Amazon, and Facebook, to name a few.