Android is the most popular mobile operating system in the world and it’s built to work with apps written in Java. Therefore, it’s no surprise that most companies that develop or maintain Android applications are always on the lookout for expert Java developers.

After getting your bachelor’s degree in computer science with a specialty in the Java programming language, you may want to learn what your expectations should be as a developer. How much should you expect to earn as a Java developer working the average job in the average organization?

In this article, I’ll answer that question in detail. Firstly, you’ll get the average salary of Java developers in the United States in general. Then I’ll outline some of the highest paying states and companies for a Java developer and explain if you should consider moving for better pay. 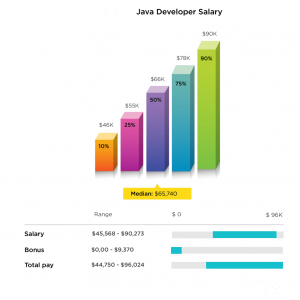 For one, most companies no longer hire for the sole position of a Java developer. Instead, they find someone with an extensive range of skills, who’s also skillful at writing and maintaining Java code. Typically, they carry slightly different job titles and descriptions and earn better salaries than people who only write Java code.

Thanks to this group of semi-full stack developers, Java developers are slowly fading out of existence. Today, there are only a few people in most companies with Java Developer as their job title, and even these professionals earn less than what you’d expect.

According to Glassdoor, the average Java Developer earns about $94,000, which is high, compared to other tech jobs. A separate analysis by Indeed shows a slightly higher salary, claiming that they earn up to $106,050 annually.

While neither of the above salaries is bad, they’re not very encouraging compared to what we see in the tech industry. Summarily, those figures are subtly warning that Java developers should consider gaining additional knowledge to help them take on jobs that pay even better.

Most of the companies that keep web or Android apps with Java components will need Java developers to either write, condense or maintain the code for their applications. When you try to compile the list of the top tech companies that use Java, you’ll notice that it’s 100% of them.

However, some companies happen to be in a more dire need of Java developers than others, depending on their tech stack. These companies are usually willing to pay you better than companies that randomly hire developers because they want someone to ensure that their Android app components are up to date.

With that said, here are some of the companies that pay the most for Java developers and how much they pay exactly.

Glassdoor’s estimation of the average salary of a Verizon Java developer is a conservative $129,325, with an additional pay average of around $11,749. While that isn’t bad, it’s even lower than Indeed estimation of around $150,000.

It’s important to note that neither of these salaries is low, and compared to the national average of $51,000, a $130,000 salary is a dream. However, you should also note that getting employed at Verizon isn’t easy either, but there’s no harm in trying.

Selby Jennings is a financial recruitment company in the United States that doesn’t usually make the top list for companies that pay developers highly. However, Java is central to operations at this company, explaining the rationale for the insanely high salaries they pay to their developers.

According to Indeed and Glassdoor, the average salary for a Java developer at Selby Jennings stands at over $190,000 annually. However, the company describes its compensation structure as performance-based, which means you may not earn that much.

Google created Android, and they still maintain some of the most commonly used Android apps like YouTube, Gmail, and the likes. While they’ve innovated better programming languages for Android development, there’s no doubt that there are still openings for Java developers at Google.

However, working as a Java developer at Google requires having much more skills than just Java. Google won’t be paying you $140,000 to simply write, review, and maintain Java code; and the case is similar with most other tech companies.

If you’ve read enough salary overviews and comparisons, you should know that your salary roughly correlates with which part of the United States you live in. While this is true for Java developers, the variation between states isn’t as impactful on java development jobs.

For one, most Java developers work remote jobs that rarely require them to make physical appearances at their workplace. A large number of them are even freelancers, helping people build and maintain Android apps on a contract.

However, all of the above facts don’t disprove the existence of a divide between Java developers from different states. For instance, developers living in New York tend to earn significantly better salaries, most of which they eventually use to stay afloat in the state, which is arguably the most expensive state in the US.

In addition to New York, California, Texas, Georgia are the other states with high-paying Java development jobs that pay up to six figures, even if slightly. However, it’s more rewarding to acquire additional knowledge and compete for better solutions than to move to these states for better pay.

An important piece of advice to all Java developers is to try getting additional skills apart from just plain Java development. While many companies do hire Java developers, there are now so many developers that have other skills like DevOps and proficiency in other programming languages.

If you can develop applications and programs proficiently across multiple programming languages, you’ll stand a better chance at working at an organization like Google or Apple, significantly increasing your chances of earning six figures easily.